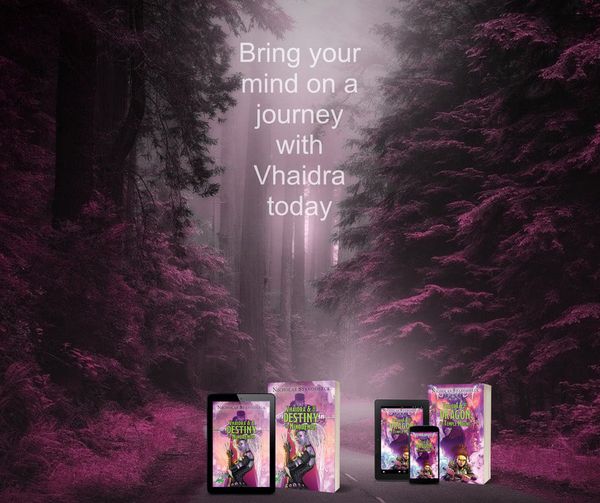 I: Vhaidra & the DESTINY of Nikodemos
Published in late 2020.
The Cult of the Jet Fist literally causes the forces of heaven and hell to collide, destroying Sicyon in the process. Meanwhile the Dark Maiden starts drawing a line of destiny from the past to the future intersecting with the lifelines of Vhaidra and Nikodemos, as one house dies, and another is formed.
II: Vhaidra & the DRAGON of Temple Mount
Published in early 2021.
An orphaned young half-dragon, his human milkmaid, and a flirtatious dwelf dancer change the ascetic hermit, Elder Dionysios, forever, whether he likes it or not. Mikhail grows from a baby to Sicyon’s powerful stylite and protector after the events of VHAIDRA & the DESTINY of NIKODEMOS and before the events of VHAIDRA & the DISEASE of DARK ELVES.

III: Vhaidra & the DISEASE of Dark Elves
Publishing late 2021.
After the events of VHAIDRA & the DRAGON of TEMPLE MOUNT, an epidemic starts to spread across Hellas from the elven lands. As it eventually becomes a pandemic, it divides the city and our adventurers into three camps; one group blames all elves—high, wood, and dark—for the pandemic and starts persecuting them, another thinks it is a false flag conspiracy by the government to control them, and the last camp is scared to death, thinking it is a sign of it being the last days.

IV: Vhaidra & the DESCENT of House Iroas
Publishing 2022.
After the scarring events of VHAIDRA & the DISEASE of DARK ELVES, Vhaidra learns the whereabouts of the last remaining survivors of her house from the underworld just as her cold dish of revenge is finally ready to be served, but at what cost? Death finally claims many of our heroes’ lives and changes the underworld forever. To be concluded in VHAIDRA & the DEMISE of HOUSE IROAS.

V: Vhaidra & the DEMISE of House Iroas
Publishing 2022.
A direct continuation of the story from VHAIDRA & the DESCENT of HOUSE IROAS. Stuck in the deepest depths of the underworld with half of our heroes now dead, the one true chosen one rises from the ashes of the battle with the Spider Queen and saves the overworld from certain destruction from below! No one comes out unscathed and no one will ever look at House Iroas the same way ever again!

VI: Vhaidra & the DUNGEONS of Drow
Publishing early 2023.
What strange secrets does Vhaidra’s long-lost indestructible staff hold and how is it connected to the Spider Queen? This is the in-depth untold story of Vhaidra’s conception, birth, and life in the cities and monasteries of the underworld of the evil Dark Mother, as told by Vhaidra to her eldest daughter, Athanasia, following the world-shattering events of VHAIDRA & the DEMISE of HOUSE IROAS.

VII: Vhaidra & the DEMONS of Zhong
Publishing late 2023.
The untold in-depth story of Nikodemos and his introduction to the Armour of the Ancient of Days by Presbyteros Romanos, as told to Vhaidra after the shocking events of VHAIDRA & the DEMISE of HOUSE IROAS. We learn what really happened when he first encountered the six succubi during his journeys to the mysterious lands of the far east, the dire warning that he receives, and the item that he obtains which will change his destiny forever!

About the Author
Nicholas Stanosheck, besides being a best-selling author, is a father, a world traveler, and a volunteer Scout Leader. His novels come from his lifelong love of fantasy novels, video games, world travels, and role-playing games. His first novel started as a short story that he had in his head for 20 years, and once he committed it to writing, the characters spoke to him and started telling him a series of stories about The Vhaidra Saga that will continue as a paperback and e-book series for years to come. You may contact him at http://Vhaidra.com
Copyright © 2000 - 2021 Nicholas Stanosheck
All rights reserved.
This a work of fiction. Names, characters, businesses, places, events, locales, and incidents are either the products of the author’s imagination or used in a fictitious manner. Any resemblance to actual persons, living or dead, or actual events is purely coincidental.